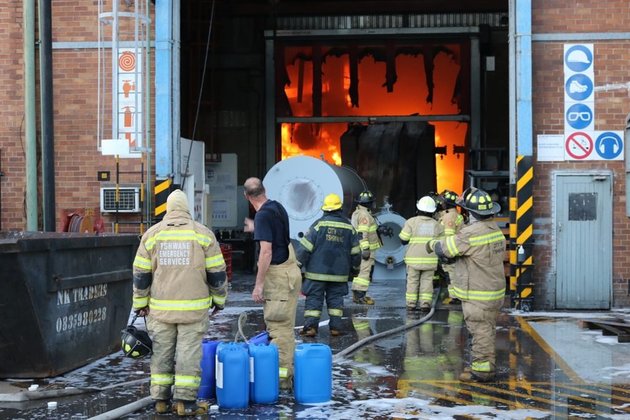 Firefighters in Tshwane saved a factory from complete destruction on Sunday afternoon after a fire broke out at an electrical transformer manufacturing plant.

According to Tshwane Emergency Services, the District Commander in the Fire and Rescue Operations Division saw a cloud of dark smoke in the direction of the Pretoria West industrial area while driving with her command aide from a house fire in West Park around 17:00.

She ordered her aide to drive in the direction of the smoke to investigate and found the factory ablaze.

"Upon arrival at the gate of the factory on the corner of Buitekant and Carl Street, they discovered smoke and visible flames coming out of an industrial plant.

"According to information provided on-site, it was established that a fire had broken out in one of the 90 kVA transformers. It was also established that there were various hazardous and flammable substances (transformer oil, kerosene, paint, liquefied petroleum gas, oxygen, acetenyl, etc.) of various quantities in the factory." The fire that broke out at a electrical transformer manufacturing factory in Tshwane. Supplied

"The south-eastern part of the building has a core cutting plant and a small transformer manufacturing plant, which were saved from the blaze.

"Several high-voltage transformers that were either completed or near completion and a control room in the main plant were destroyed by the fire."

The fire was contained around an hour-and-a-half later and firefighters continued to fight the blaze until after midnight when cooling off and the elimination of hotspots were completed. The fire that broke out at a electrical transformer manufacturing factory in Tshwane. Supplied

"The extent of the damage has not yet been quantified and the exact cause of the transformer catching fire remains a subject of investigation. Firefighting teams continue to monitor the plant for any possible flare-ups," Mabaso concluded.