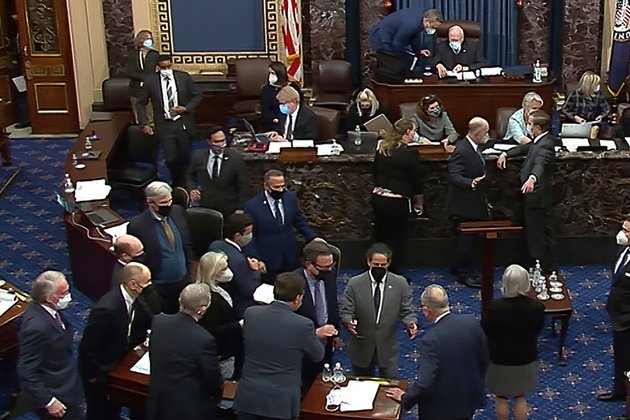 "Today, I can say we have taken one more giant step for delivering on that promise that help is on the way," Biden said at the White House minutes after the bill's approval. "It obviously wasn't easy, it wasn't always pretty, but it was so desperately needed, urgently needed."

Passage came after a lengthy session to make a series of late changes to shore up support from Democratic Party members.

The bill was approved 50-49 in the 100-member Senate without any Republican support. It now goes back to the House for reconciliation before Biden signs a final version into law.

"The House now hopes to have a bipartisan vote on this lifesaving legislation and urges Republicans to join us in recognition of the devastating reality of this vicious virus and economic crisis and of the need for decisive action," House Speaker Nancy Pelosi said in a statement.

Democrats and Republicans were deadlocked for hours over competing proposals to increase weekly jobless benefits for those adversely affected by the coronavirus pandemic.

Democrats overcame the hurdle by reaching a deal with moderate Democrat Joe Manchin late Friday over an unemployment compensation provision in the bill after hours of negotiations. Democrats reduced the proposed $400 weekly emergency unemployment benefits to $300 a week and included a tax break for most people receiving unemployment to win Manchin's support.

Sorry, but your browser cannot support embedded video of this type, you can download this video to view it offline.

The bill faced stiff opposition from Republicans, who denounced it as wasteful amid signs the pandemic is easing and the U.S. economy is strengthening.

Republicans had tried to win support from Manchin for their own unemployment insurance proposals, leading to a nine-hour logjam Friday that stalled action on the bill.

Democratic leaders in the Senate had a fine line to walk to win the support of both moderates, like Manchin, who wanted to rein in the costs of the bill, and progressives who wanted to include more government spending. They also could not afford to lose the support of Democrats in the House, who passed their own version of the legislation last month and control that chamber by a mere 10 votes.

Earlier in the week, Senate Democrats and Biden agreed in a concession to moderates to tighten eligibility for proposed direct payments of $1,400 to most Americans. The new provision phases out the payments for individuals who earn more than $80,000 a year, far lower than the figure in the House bill.

In addition to the direct payments, the relief legislation provides money for COVID-19 vaccines and testing, state and local governments, and business sectors hurt by the pandemic's economic fallout, such as the restaurant and airline industries. It also provides tax breaks to lower-wage earners and families with children and gives financial aid to small businesses.

Democrats argue the measures are needed to revive the economy and to fight the COVID-19 pandemic that has claimed more than 524,000 lives in the United States. Republicans, who largely backed previous COVID-19 spending, said another $1.9 trillion was simply too expensive.

A federal minimum hourly wage increase to $15 from $7.25 proposed by Democrats was dropped from the Senate bill after the parliamentarian in the Senate - the chamber's adviser on the interpretation of its rules and procedures - said the proposal did not meet special chamber rules governing debate.

Senator Bernie Sanders proposed an amendment to the relief bill Friday to add the wage hike back into the legislation, but it fell far short of the 60 votes needed to overrule the Senate parliamentarian's decision. Senators voted 58-42 against the increase, with eight Democrats voting against the proposal.

Democrats have pledged to continue working for a minimum wage increase in legislation separate from the COVID-19 aid bill.